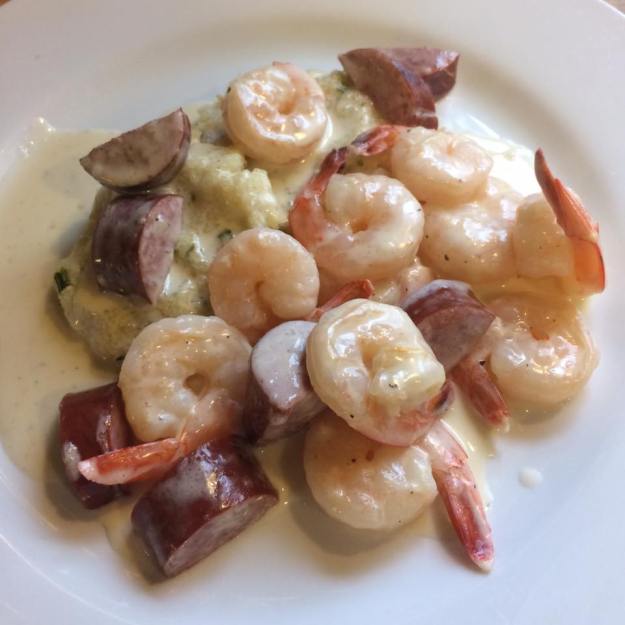 Bring water to boil.  Gradually whisk in grits. Reduce heat to low, cover pan and simmer until tender and almost all of the liquid is absorbed. Stirring almost 8 minutes. Uncover and stir until liquid is absorbed.  Remove from heat and stir in the jalapenos.  Season with salt and pepper and set aside.  Let cool, but do not set, about 30 minutes.  Stir if needed.

Drop the grit mixture by the 1/4 cupful onto nonstick baking sheet. This will form six rounds.  Press with fingers to make patties.  Let stand for 1 hour totally set up.

Preheat oven to 350 degrees.  Bake the grit cakes for about 15 minutes.

Meanwhile….melt butter in large skillet over high heat.  Add shrimp and sausage, saute until the shrimp are opaque in the center.  This will take about 3 minutes.  Using a slotted spoon transfer proteins to plate.  Add cream and broth to skillet, stir until thickened, about 3 minutes….add cheese, and simmer until melted and sauce thickens, about 2 minutes.

Return shrimp and sausage to skillet, season with salt and pepper.  Remove from heat.  Plate grit cakes on plate, (2 for entrée and 2 for appetizer).  Spoon sauce over cakes equally.  Sprinkle with chives and stir.